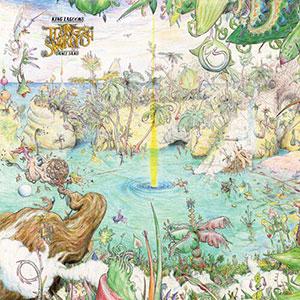 The eight-piece King Lagoon's Flying Swordfish Dance Band is the brainchild of Brighton-based vocalist and multi-instrumentalist Rodrigo Kerr. Instead of an ordinary biography of the band, on their website King Lagoon's Flying Swordfish Dance Band posted the legend of King Lagoon, ruler of a tropical paradise in a parallel dimension: "The realm of King Lagoon hosts many diverse and exotic lands and small islands where the royal flotilla races and cruises to the sounds of the King's favorite bands. This dimension is similar to ours but many things can work quite differently and unexpectedly. A messenger from King Lagoon, a small golden bird with 5 wings, iridescent plumage and large expressive eyes, made contact with Rodrigo in 2010 to ask him to create a band... Whether it was to simply open up interaction or for a more dramatic reason, the exact motive remains unknown. Appearing at a window, having to be released from the inside of a drum or coming out of a tap, a computer screen or a saxophone, the bird appears to Rodrigo - alone or at band rehearsals - to drop off little parcels of exotic flavored treats. Rodrigo and the other Flying Swordfish eat these tasty delights, and as they taste the other-dimensional flavors, more becomes known to them about the realm of King Lagoon, as well as inspiring music and ideas for the performance.".

The language of King Lagoon's kingdom proves to be Portuguese, as illustrated by 6 from the 12 tracks on 'The Golden Lagoon' (completed with as many dreamy interludes that should give an impression of the tropical natural beauty of King Lagoon's kingdom), for which the band members drew on genres like samba, soukous, Congolese rumba, psychedelia and batucada, to end up, as they put it themselves, between the exotica of American jazz pianist Martin Denny, the sound of Peruvian soprano and icon of exotic music Yma Sumac and that of the father of the hippie movement, Eben Ahbez, on an undiscovered island somewhere between Rio, Kinshasa and Brighton!