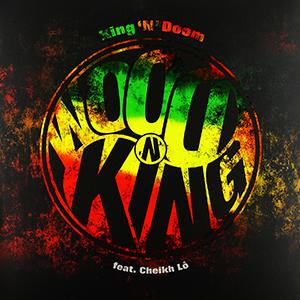 This self-titled album is the culmination of an unexpected friendship and the fulfilment of the musical dream of Martin Piro and Pavel Šmid, two Czech musicians and producers. It all started many years ago with a visit to Festival au Désert and Festival sur le Niger, two music festivals near Timbuktu, the duo made their way towards hitchhiking from the Malian capital Bamako. That trip would prove the catalyst for a shared passion for (West-) African music the duo would never shake again. A few years later, Zlata Holušova, organizer of the Colours of Ostrova Festival, managed to convince Cheikh Lô to travel to the Czech Republic, where Martin and Pavel were also slated to play that year. The three would eventually meet in a caravan converted into a mobile recording studio by Milan Cimfe, founder of Sono Records. Before they knew it, the trio was jamming together and eventually Cheikh Lô even took the microphone to sing an excellent version of 'Jarabi', a West-African song Martin and Pavel had given a reggae revamp and renamed 'Jah'rabi'. Lô's version would later become the first single of the King'n'Doom project and is also the opener of this long-player. After the meeting with the Senegalese icon, for Martin and Pavel there was no turning back, and when sometime later they had to play at the Folkové Prázdniny Festival in Náměšt' nad Oslavou, where bumped into singer Hawa Kasse Mady Diabate (featured in 'Jah'rabi' together with Cheikh Lô) and ngoni-bassist Mamadou Kouyate of Trio Da Kali, the whole project gained momentum.

Senegalese sabar-percussionist Leopold Lô and ngoni-player Moustafa Kouyate were also brought on board and thus the "band" slowly took shape. Pavel then traveled to Senegal to join Cheikh Lô and his band members, and that's how singer Zeina Ndong also got involved in the project ('Thiamness', a feminist song, in which the singer calls on men to get out of their lazy chairs instead of having their wives do all the work). Martin for his part got to know Malian singer Bibby Ssamake on Facebook ('RAW', a song that started out as the instrumental 'KarKar', a musical tribute to Malian veteran Boubacar Traoré, but was transformed by Bibby into a powerful anti-war-statement), and later Ivorian djembe-fola Thomas Guei and Burkinabe balafon master Abdoulaye Dembele also contributed.

Does it have to be said that with 'King'n'Doom' Martin Piro and Pavel Šmid created a gem of an album? We gladly give the last word to Pavel: "Working on this album gave me more than I could have imagined. What I gained from the experience can't be underestimated. The feeling that nothing is impossible when you keep ploughing ahead. If someone had told me a few years ago that I would be lucky enough to have this experience whilst recording 'King'n'Doom', I wouldn't have believed them. It has always been my dream to travel the world and make music. And suddenly I found myself in the middle of Dakar with a small backpack, empty pockets, but with a song in my bones. It is still unfathomable to me that the song I composed at home on my lap was sung by Cheikh Lô and is now most likely playing on the radio in a dilapidated taxi somewhere in Senegal. Honestly, it blows my mind...".