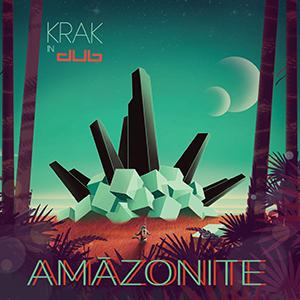 Earlier this year, Krak In Dub already presented a taster of 'Amazonite' with the release of an eponymous 4 track EP. For the album version, Federico Trujillo aka Krak in Dub's long player debut, a further 11 tracks, an interlude ('Seen Interlude'), and a jungle/dub version of opener 'Some People' were added. And it doesn't end there, as to give this release that little bit extra, upon purchasing the album you'll also receive a download code allowing you to download no less than 50 (!) of Krak In Dub's productions from the period 2003 - 2016! If based on the EP you were assuming 'Amazonite' would mainly contain dubby instrumentals, you might be disappointed (even though the instrumental 'Who Runs Science', in which American astronomer, astrophysicist, cosmologist, skeptic and science communicator Carl Sagan, can be heard philosophizing about the importance of science and technology, is one of our favorites from the track list), as for the majority of the tracks on this album, Krak In Dub invited a number of his favorite vocalists (Troy Berkley, Demolition Man, Jamalski, Echo Minott, Eva Lazarus, Sr. Wilson…). It results in a diverse sounding track list, going from new roots in opener 'Some People' featuring Demolition Man, over hip-hop meets drum & bass in 'I&I&I' featuring Eve Lazarus and Troy Berkley, and ska in 'Stop' featuring Jamalski, to jungle in 'When Gunshot Burst' featuring Echo Minott, 'Step By Step' featuring Sr. Wilson and 'New Specimen' featuring Troy Berkley, and the UK stepper vibe of 'Don't Feel No Way' once again featuring Demolition Man. Who might have guessed the combination of science and technology could also yield interesting music?