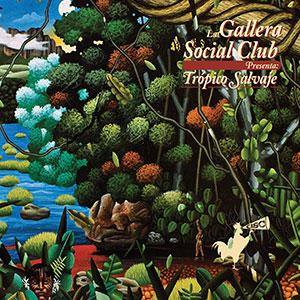 The brothers were born in Maracaibo, a bustling oil town in eastern Venezuela where the Andes, tropical rainforest and Caribbean coast meet. In Venezuela "galleras" are the arenas where traditional cockfights are organized, but a "social club" is of course a place where friends meet, putting the gallera in a context where the cocks no longer fight but sing and dance together.

The cover illustration of 'Tropico Salvaje' ("tropical wilderness") is an adaptation of a work by Angel Peña, an artist from Maracaibo.

The duo moved to France in 2011 and is also active in side projects like Tito Candela, Mantekiya and Maa' Ngala, a collaborative project with Senegalese kora master Ablaye Cissoko.

Opener 'Manduco' is an adaptation of the eponymous song by well-known Venezuelan jazz singer Maria Rivas who lost the battle against cancer in 2019, age 59. La Gallera's version is driven by percussion on the Afro-Venezuelan tambora de gaita, while in 'Moroka Jia' the sound of indigenous flutes predominates. In 'Mariposa', Spanish for "butterfly", the duo performs the Caribbean steelpan and plays with Venezuelan genres like cumbia and joropo, while in 'Cecilia' we're treated to the sound of the cuatro, the typical Venezuelan four-string guitar, in a song that flirts with influences from Caribbean genres like beguine and calypso (rhythms introduced in Venezuela at the end of the nineteenth century, when Caribbean guest workers came to work in the oil industry). For 'Kuje' we once again go indigenous, as this song tells the story of a young member of the Yukpa tribe celebrating the corn festival, and the album concludes with 'Guacamajo', an ode to Afro-Venezuelan culture with a rhythm based on the percussion rhythms of the Marrons or Maroons, fugitive slaves who settled in free communities known in Venezuela as cumbes.

Excellent kaleidoscope of the rich music spectrum Venezuela has to offer and, in surely, a welcome sound of positivity from a nation getting almost nothing but bad press in recent years.