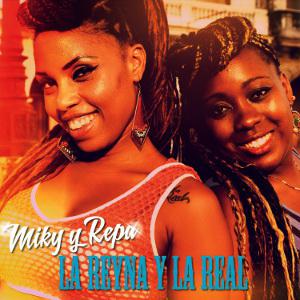 Feel free to consider La Reina Y La Real as the Cuban answer to female American hip-hop duo Salt-n-Peppa. La Reina was born in Havana as Reyna Mercedes Hernandez Sandoval and studied industrial chemistry for a while before shifting her focus on a career as a rapper with local band Alzar La Voz (loosely translated: "Let your voice be heard!"). La Real (born Yadira Pintado Lazcana) also hails from the Cuban capital and initially combined her ambitions in the Cuban hip-hop scene with a job as a social worker. When both girls met back in 2012, they immediately decided to join forces making it their mission to send out a strong feminist statement with their music. In addition to La Reyna and La Real, DJ/producer Moises Whittaker Alvarez is also involved in the project and pianist Laura Martinez Napolis also contributed on 'Miky Y Repa'. For songs like 'La Respuesta', 'Ponle Actitud' and 'Caminando' the ladies invited vocal guests like Mo Records, Laura Martinez and Zule Guerra. As far as we could make out, in most of the tracks on 'Miky Y Repa' La Reyna and La Real show themselves a strong female front (even though you'll need a solid grasp of the Spanish language to get what they're on about), but musically the track list is a lot more varied, as the ladies mix their beats with influences from jazz in songs like 'La Respuesta' or 'Caminando', or even some tango in 'No Son Na' or 'Mas Que', and for title track 'La Miky Y La Repa' they even throw in some swing. ¡Rap Cubana estilo feminina!