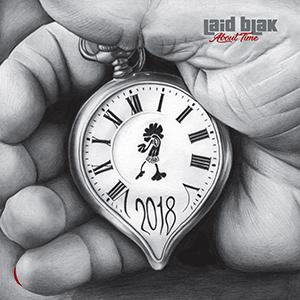 For yours truly 'About Time' was the first introduction to Laid Blak, a project around DJ Bunjy and MC Joe Peng, but in fact this is already the second album by this Bristol based band. Their long player debut 'Red & Blak' already dates back to 2012, so this successor was given the more than appropriate title 'About Time'. The sound of Laid Blak is a contagious cocktail going from Michigan & Smiley-like rub-a-dub in 'Mic Man' over reggae meets hip-hop evoking memories of Born Jamericans or Shinehead in opener 'Cool Dude', to even a dash of Irish folk in the intro of 'War' or a successful melodica cover of Tanya Stephens' super hit 'It's A Pity'. To spice things up, Bunjy and Joe Peng invited a host of guest vocalists among which, Jamaican singjay and fellow Bristolian Da Fuchaman, MC Dee, Flex, and for some added feminine charm there are Bristolian from British Antiguan descent Tanya Lacey and fellow townsman Tita Lau. Highly original, super contagious album, and for yours truly one of the absolute discoveries of 2018!