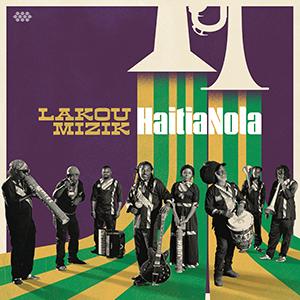 The most recognizable song in the track list is undoubtedly 'Iko Kreyòl', for which Lakou Mizik collaborated with Win Butler, Regine Chassange, Preservation Hall Jazz Band and 79rs Gang, and which is actually a Creole version of 'Jock-A-Mo', better known as 'Iko Iko', an often covered song (Sugar Boy and his Cane Cutters, The Dixie Cups, Natasha, Dr. John, The Belle Stars...) from New Orleans that tells of the clash between two Mardi Gras Indian Tribes during the annual parade, but this whole disc sounds like one big gumbo (a soup or stew popular in the US state of Louisiana, having its origins in the ethnic mix that Louisiana has always been, combining French, African, Spanish and Indian cooking methods and ingredients, consisting primarily of a strongly-flavored stock, meat or shellfish, a thickener, and what Louisianians call the "Holy Trinity" of vegetables, namely celery, bell peppers, and onions) of Mardi Gras meets Karnaval.