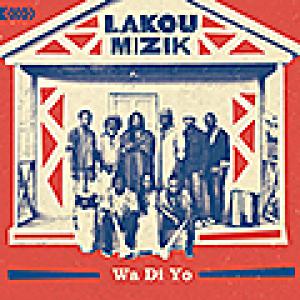 Of course we all know ex-Fugees Wyclef Jean and Pras Michel, and bands like Boukman Eksperyans and Tabou Combo also vomiting internationally by, but for most the rest of the Haitian music landscape is probably largely uncharted territory. With Lakou Mizik, a band you may consider the Haitian answer to Buena Vista Social Club, that might now well change! In Haitian Creole, the term "lakou" has multiple meanings: it can be a courtyard (similar to the Jamaican "yard"), a place where people gather to sing, dance, debate or eat, but it also means "at home", and in voodoo tradition it is a holy place under a sacred mapou or ceiba tree where practitioners of the voodoo cult come to perform their rituals. The nine band members of Lakou Mizik represent a broad range of ages, religious beliefs and styles of music. The band is the brainchild of singer/guitarist Steeve Valcourt (son of Boulo Valcourt), vocalist Jonas Attis and American producer Zach Niles (in the past also one of the driving forces behind Sierra Leone Refugee All Stars), who saw Haitian music culture as the ideal antidote against the negative spiral of diseases and political unrest plaguing the island in the aftermath of 2010's devastating earthquake. Lakou Mizik takes the listener to a world of voodoo rhythms, rara, twoubadou and compas, and as far as we're concerned you may consider this band our "hot tip" for the summer festivals of 2016!