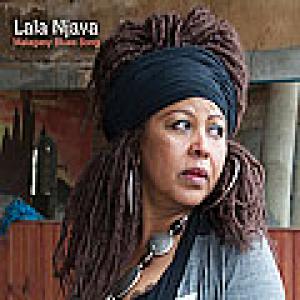 With the release of her solo debut 'Malagasy Blues Song', Lala Njava also offers us one of the world music gems of 2013. A complete solo effort this album is not as Lala got the assistance of her brothers Dozzy (ensuring the valiha-like guitar parts), Pata and Maximin. Add to this Régis Gizavo's accordion and you get a wonderful intimate album taking you for a trip along the ups ('Gnanay Soa') and downs ('Hasosora', a song dedicated to Lala's late sister Pascale and an indictment of the polygamy on the island, 'Mosera', an indictment of child prostitution in Madagascar) of Madagascar. The most recognizable track on 'Malagasy Blues Song' is 'Sweet Lullaby', a song Lala first recorded with Deep Forest and which subsequently became an absolute world hit, rerecorded here in a moving acoustic version. Highly recommended!