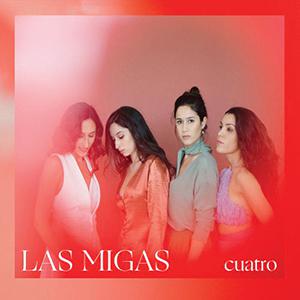 Normally flamenco doesn't really belong to our musical frame of reference, but for the refreshing sound of Las Migas we gladly made an exception. With 'Cuatro', the Barcelonan female quartet not only celebrates its fifteenth anniversary, but the album is also the fourth album of the four-piece band. For 'Cuatro' the ladies together with producer Sebastian Marlin revisited eight songs from their previous albums, 'Reinas Del Matute' (2010), 'Nosotras Somos' (2012) and 'Vente Conmigo' (2016), and added two new songs: 'Alli Te Esperare' and 'La Maleta'. Band name Las Migas (literally translated from Spanish: "the crumbs", but also the name of a Spanish dish, originally a breakfast dish made from scraps of bread or tortas, but grown into a hip appetizer that is served in many Spanish restaurants with ingredients varying from province to province) refers to the sound of the band for which the four ladies smoothly spice up Spanish flamenco with influences from pop, jazz, rumba catalana and more. Extremely enjoyable Spanish flamenco 2.0 with a feminist touch.