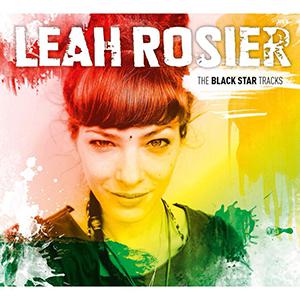 With 'The Black Star Tracks', her third long player to date, Amsterdam based singer Leah Rosier realized one of her dreams, as  part of the songs were recorded in Jamaica, where she collaborated with Firehouse Crew. But as the title implies, Leah's been part of the Black Star Foundation crew for some time now, so Asher-E also made a substantial contribution: in 'Rude Boy', a critique of the idiotic macho behavior of some reggae and dancehall fans, you'll recognize Black Star's Lovely Girl riddim, for 'Come Rain Come Shine' the Rub A Dub riddim was used, and behind lovers tune 'Butterflies' the Bad Gals Dancehall riddim is hiding. 'The Black Star Tracks' contains 10 brand new songs, including two ganja tunes ('Realize', for which the singers to a ska-gear, and 'Make It Burn'), and a dub version of 'Rude Boy'. Our personal favorite from the track list is the melodica driven break-up tune 'Not Cursed' though. Solid production without any real highlights or surprises.