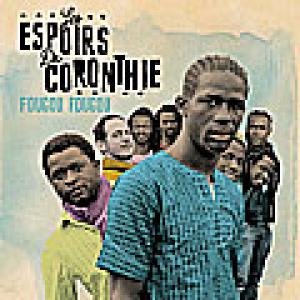 Yours truly first got acquainted with Guinean band Les Espoirs De Coronthie at the 34th Edition of the Sfinks Mixed festival in 2009, but their debut album ('Thinkhinyi', Wountanara, 2009) unfortunately didn't make it unto these pages. Now, five years later, the band returns with 'Fougou Fougou' (referring to the biggest hit they scored in their homeland Guinea, a revamped version of which was added to the track list of this album). The music of Les Espoirs De Coronthie is still mainly driven by percussion rhythms, but on 'Fougou Fougou' the band also dares to explore other horizons (the Latin-inspired 'Mara Fanyi Kholokho'). The different members of Les Espoirs De Coronthie have been residing in France for several years now and this album was recorded at Le Peuple de l'Herbe's Supadope studio in Lyon. In that light the band underlines the big differences between the idealized image of France that exists in Guinea and the harsh reality of the African immigrants who actually end up there in 'Aventure'. 'Fatigué', the first song the band recorded entirely in French, criticizes the continuing corruption and bad government of many African leaders. Hard to sit out is 'Mamayo', a love song powered by a fast and energetic percussion rhythm and with 'Sekou Touré' Les Espoirs De Coronthie pay tribute to the first president of Guinea, Ahmed Sekou Touré, and other inspirational leaders of the first generation like Thomas Sankara and Patrice Lumumba.