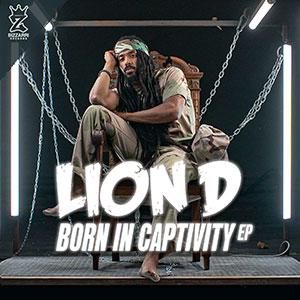 After his American outing as David Lion for 2017's Sugar Cane Records production 'Mandala', things around Nigerian-Italian reggae artist David Andrew Ferri, better known as Lion D, quieted down, but with this 5 track 'Born In Captivity' EP he now returns to his old buddies of Bizzarri Records. Three tracks from the track list were written by Leo Bizzarri, played by the Livity Band, 'Queen Of The Dancefloor' was produced by Paolo Baldini and played by Mellow Mood, and for ganja tune 'Puff My Sensi', stylistically leaning towards r&b, a riddim of South-African producer Reggie Beatz was used. In the strong opener 'System Faillure' Lion D incorporated a nod to Bob Marley's 'We And Them' with the lyrics: "Me no know how we and dem a-go work it out..." and, supported by a powerful video clip that leaves little to the imagination, he criticizes the ever increasing implosion of democratic values in Europe, but our favorite on 'Born In Captivity' is 'Eyez Wide Open', an absolute top tune that could just as well have been a new song by Protoje or Chronixx, with a chorus ("Keep your eyes open wide, in the kingdom of the blind!") immediately nestling itself like an earworm in your brain. Lion D still deh yah!