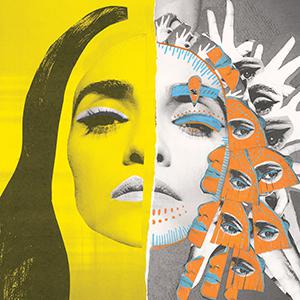 Liraz Charhi, a descendant of a Persian family who fled to Israel at the brink of the Iranian Revolution in the late 1970s, is a familiar face in her own country, both in theatre and film (including Doug Liman's 2010 movie 'Fair Game', and Yaron Zilberman's 'A Late Quartet' from 2012) and as a singer. Where the latter is concerned, during a trip to Los Angeles, a city with a large Persian community (known as Tehrangeles), Liraz got captivated by the counter-revolutionary sounds of Iranian music legends like Googoosh, Ramesh and Dariush. For her debut album 'Naz' (Persian for "cute") she joined forces with Israeli producer Rejoicer who complemented the Liraz' renditions of traditional Iranian pop songs - a mix of self-penned tracks and covers by some of the aforementioned artists - with electronic beats. Our favorites: the swinging 'Zendegi' ("life"), a cover of an old song by Iranian singer Pooran one could summarize as "seize the day", the rather traditional sounding 'Nozi Nozi', written by Iranian veteran Ali Nazari (and with an accompanying music video shot in vintage seventies style), in which Liraz plays with "noz", the Iranian archetype of the eternally smiling woman who subtly manages to get her husband to do everything she wants, and finally 'Shirin Joon' ("she is so sweet"), a love song and a cover of an original by Iranian singer-songwriter and guitarist Kourosh Yaghmaei. More than successful update of the golden era of Iranian pop music.