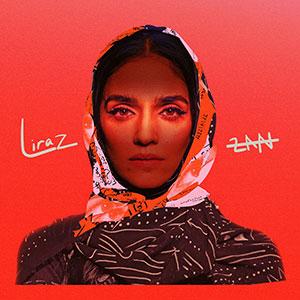 Two years ago, we were introduced to the work of Iranian-Israeli Liraz for the first time thanks to 'Naz', an album on which she went in search of the roots of the (former) Iranian pop culture of the nineteen sixties and seventies.

Those same influences still show up on successor 'Zan' (Farsi for "women"), an album meant as an ode to Iranian women in general, but the strong women from Liraz' own family in particular: "I sing because of these women, to them, for them. My grandmothers were engaged when they were 11 and 12 and married at 15. They both had many children, but they had so much passion for life. I grew up with so many crazy stories about these women. My mother broke down the walls around women. So did my aunt. I watched them since I was a child. They fought for their freedom, and I'm fighting for mine, telling the stories about them in my songs.".

But 'Zan' is much more than that; this album is also a pamphlet, against the political situation in Israel and even more the repressive policies of the mullahs and the PAVA or secret police in Iran.

Thanks to 'Naz' (and the internet) Liraz also became known in Iran, and soon started receiving messages from various Iranian artists who, albeit anonymously, were all too eager to work with her: "At first the idea seemed like a fantasy, but I had a lot of luck. Some people in Iran had found 'Naz' and got in touch online. Musicians sent me videos; some wrote every day. I posted questions, asking about different players and instruments. Over a year and a half, the songs for 'Zan' took shape. Some were scared, since helping like this was against the law and asked me not to use their names.".

One of those anonymous musicians, a percussionist from Tehran, can be heard in opener 'Zan Bezan' ("women sing!"), electro-pop with firm nods to Iranian pop stars from the nineteen seventies like Googoosh, as could also be heard on 'Naz', and 'Joon Joon', pulled straight from an Iranian seventies disco, is an Iranian collaboration as well: "Joon is my name for my daughter, a nickname that means "my soul". When we talked online, one of the Tehran musicians would see me with my daughter and asked who she was. That was how the song began.".

Immediately after this exhilarating dance track, we get the beautiful ballad 'Shab Gerye', and Liraz concludes with 'Lalai', originally a lullaby, but a perfectly capturing the spirit of the album: "My grandmother sang it, my mother sang it, and I sing it to my daughter. It's been in our family for generations. I knew I had a mission to do it. It's a song that says you need to fight for your own life, my girl.".