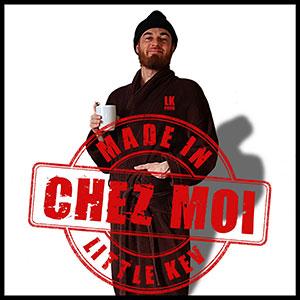 Although Kevin Tranché aka Little Kev, hailing from Bauvin near Lille, has been active in the French reggae circuit since 2012 (including as a toaster with Iguana Soundsystem), he is only now presenting this 7 track 'Made In Chez Moi' EP. The title refers to the fact Kevin did just about everything, from recording and mixing the tracks and designing the cover to shooting some accompanying music videos, by himself. In the context of the current pandemic, COVID-19 anthem and bonus track 'Reste Chez Toi' is probably the most relevant song from the track list, but other highlights include 'Combien de Temps', in which Little Kev talks about our all-consuming screen addiction, the autobiographical title track 'Made In Chez Moi', and 'Aie Aie Aie', featuring an intro by Ramses Ooki, band member with Saï Saï, pioneers in the French ragga scene since the late 1980s. Successful old-school French ragga release!