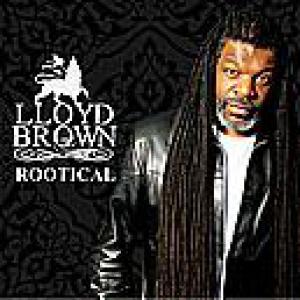 Like its European counterparts Irievibrations Records and Soulbeats Records, American Zion High Productions is slowly but surely building itself a reputation for solid roots releases. After successful albums by, among others, Glen Washington and Cornel Campbell, now it's Lloyd Brown's turn, a singer yours truly considers as one of the most undervalued in today's reggae scene. Although in the past Brown has shown himself to be a gifted interpreter of lovers rock, as the title suggests, for 'Rootical' he almost exclusively opted for a roots approach ('Na Na Na' and 'I Don't Think You Heard Me' are nice exceptions). Although the albums of Zion High Productions again and again reflect solidity and love for the genre, they lack a certain punch and 'Rootical' is no exception to that. That being said, the three duets on the album ('Keep On Keeping On' with Jahdan Blakkamoore, 'How Could I' with Yisrael Immanuel and 'Together' with Queen Omega) come pretty close.