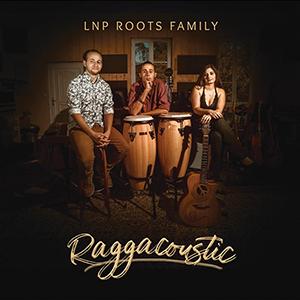 If you think of French acoustic reggae, it's hard not to think of Tryo, and it's that band that LNP Roots Family mentions as their main source of inspiration. By the way the "family" part in the band name is to be taken literally, as this is a trio consisting of brothers and sister David 'Dnom' - vocals, Mat 'O'lyrics' - vocals and guitar, and Leytis Giordano - vocals and guitar (completed with Moon aka Mdezoen - composer and producer), and the letters LNP stand for Love aNd Peace. The band started out as a quintet, but after the release of their debut EP 'Premier' in 2013, their bassist and percussionist left, so the remaining trio had to go in search of a new formula. In 2018 the band released 'Résigné', a first 4 track acoustic EP, now followed by 'Raggacoustic', an album we dare to describe as Tryo 2.0., with the big strengths of LNP Roots Family being the flow, pace and rhythm of the trio, as the album title clearly indicates, an acoustic French ragga sound, and the presence of sister Leytis, whose voice provides a feminine touch. Because of the rather high tempo of many of the songs on 'Raggacoustic', some knowledge of Molière's language is required, but you can safely describe LNP Roots Family as a socially engaged band, something that manifests itself in songs like 'Soldat', in which the trio present themselves as defenders of human rights and call on their listeners to join their ranks, 'Je Ne Voterai Pas', in which they express their disapproval of the political class only occupied with defending their own privileges, 'Consom'actors', a "jeux de mots" (play on words) with "consomateurs" and "acteurs", a sharp criticism of our western consumption pattern with a call to action to bring the whole system to its knees through boycotting. The track list of 'Raggacoustic' also features two vocal guests: for 'Roots Reggae Family', LNP Roots Family joined forces with another trio, R.I.C. from Paris, and in 'Plus Que Ça', in which they remind us that their songs are more than just music, Dnom, O'lyrics and Leytis are joined by SMAD. Highly recommended French ragga à l'acoustique!