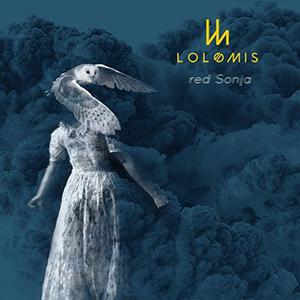 As the title suggests, for their new album, which they describe as: "...a modern and feminine dance bar full of sophisticated dreamers, naughty heroines, powerful shamans, dashing young women or seasoned seducers, who immerse us with their little everyday life stories full of great emotions in a world of love, life and death.", French quartet Lolomis drew inspiration from the persona of fictional heroine Red Sonja. That character first appeared in 'The Shadow Of The Vulture', a 1934 short story by American author Robert E. Howard, but in 1973 was transformed by Marvel Comics into the scantily clad fantasy amazon immortalized on the big screen in 1985 in the fantasy film of the same name starring Brigitte Nielsen and Arnold Schwarzenegger in the leading roles. The fact this album is all about feminine power is beyond doubt, and is emphasized by a concluding quote from Virgil's 'Aeneas' at the back of the liner notes: "De dux femini facti!", literally translated: "The leader of the act was a woman!", and often used throughout history (among others by queen Elizabeth I) as a slogan for female leadership. On 'Red Sonja' we once again travel from Finland (opener 'Hilijalleen', 'Läsnä Lämmitelle') to Bulgaria ('Ako', in which death is not mourned but celebrated, 'Pusta', about the transience of youth), onwards to Romania, Serbia (the new wave-like 'Grandpa') and Macedonia ('Koga Oro Zaigra', an ode to Macedonian women), with a short stop in the Netherlands (the surprising interlude 'Hyrkania', built around a sound clip recorded during a mass celebration in St. John's Cathedral in 's-Hertogenbosch), passing through Georgia (the EDM meets folk of 'Bindis', with very morbid sounding lyrics in these COVID-19 times: "This world wears the color of the sunset and is getting darker and darker. The invisible death will come and disarm you in seconds…") eventually ending up in Spain ('Morena', a Ladino song about the transience of beauty and the vice of vanity). Lolomis continues to produce a kind of elusive eclecticism that is difficult to summarize in a single sentence.