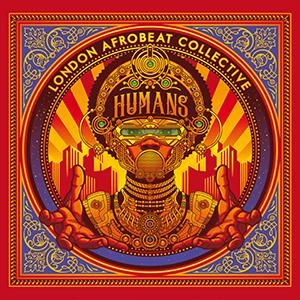 'Humans' is our first introduction to the nine-piece London Afrobeat Collective, a band counting members from the United Kingdom, Congo, Italy, France, Argentina and New Zealand, who apart from Fela also mention Frank Zappa and Parliament/Funkadelic as sources of inspiration. In London Afrobeat Collective's sound you'll effortlessly find influences from funk, rock ('Stop Talking'), jazz ('All You Need Is Air') and dub. As far as 'Humans' is concerned, you can also take the Parliament/Funkadelic link quite literally, as the beautiful cover illustration is the work of Ben Hito, in the past already responsible for many a Parliament and Funkadelic album cover. Just like Chilean Newen Afrobeat, with vocalist Juanita Euka, London Afrobeat Collective opted for a frontwoman. Not just a gimmick as it turns out, but a well-considered choice, endorsed on 'Humans' by the firm feminist statement 'Power To The Woman'. Highly recommended chunk of energetic Afro-funk!