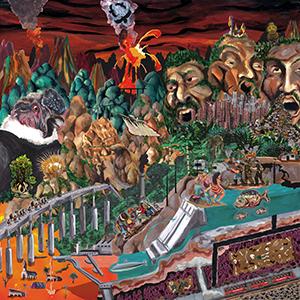 Los Pirañas is a Colombian supergroup composed of trio Eblis Alvarez (Meridian Brothers & Chupame el Dedo - electric guitar, computer and synthesizer), Mario Galeano (Frente Cumbiero & Ondatropica - bass guitar) and Pedro Ojeda (Romperayo & Chupame el Dedo - percussion), old schoolmates, who with 'Historia Natural' are already presenting their third album. Pedro Ojeda: "To me, this album is going back to where we were in high school. We didn't have so many goals back then. We wanted to play riffs, to express ourselves, to find that rough spirit.". Eblis Alvarez adds: "We're looking back, but with all this experience. We were too much in a comfort zone; we were getting lazy about what to do next. So we talked and came up with some concepts. The three of us have a soul bond and a long history together.". "There's a huge Colombian repertoire of recordings that have influenced us. As a drummer, those rhythms have been my main inspiration. I try to get the feeling and the energy of those discs from the 1950s to the 1970s in what I do with the band," Ojeda summarizes. The result is a disc on which traditional Latin American rhythms like cumbia, champeta, tropicalia and salsa collide with psych-rock, minimalist dub and experimental jazz; all the more impressive when you know that all the tracks on 'Historia Natural' were recorded live in the studio. Mario Galeano: "Every sound you hear on the album is us playing live. In the studio we jam and develop different takes on ideas. Much of what we do is improvised. We know each other so well that we're very connected; the communication between us is completely natural. It's why we don't have to rehearse that much.". Deliciously deranged Latin American retro-futurism!