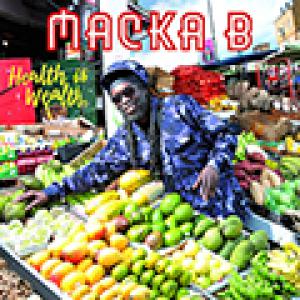 With 'Health Is Wealth', British-Jamaican reggae veteran Macka B finally presents the ideal soundtrack to the various 'Medical Mondays' and 'Wha Me Eat Wednesdays' clips he's been posting on his Facebook-page on a weekly basis for quite some time now. If we add the singer recently launched his own 'Wha Me Eat Superfood Range' and the picture is complete. In addition to the title track in which Macka defends the ital lifestyle, the track list also contains a remix of 'Wha Me Eat' (featured in its original version on 2009's 'More Knowledge' and a statement of the fact a vegan lifestyle needn't be boring or restrictive), and with 'Lyrical Chef ', a tune we already knew from Sticky Joe's 'Kingston Express presents Kingston Connection' EP, and 'Cucumba', a moderately successful musical version of a 'Wha Me Eat Wedsnesdays' clip in which Macka promotes the benefits of the cucumber, the deejay also remains in the kitchen. In the same vein is 'Excess Baggage', in which Macka B warns against obesity and promotes fitness, pilates, yoga and other forms of exercise. One of our personal favorites from the track list is the understated 'Gangster', lirically somewhat similar to Samory I's 'Rasta Nuh Gangsta'. The only guest vocalist on 'Health Is Wealth' is Macka's old mate Maxi Priest, with whom he recorded 'Jah Jah Children', a dubstep revamp of the Ras Michael & The Sons Of Negus classic. With 'Legendary Reggae Icons' and '70's Legendary Reggae Icons', Macka B twice in a row honors some of the biggest names in reggae, the one time over the My Conversation riddim and the other over Dennis Brown's 'Here I Come'. For 'Natural Herb' Macka made another notable riddim choice, as for this ganja tune he dusted off the ultimate eighties classic: Sleng Teng. The deejay concludes with 'My King', a tribute to Haile Selassie over an a-capella adaptation of the Satta riddim. Fresh reggae vibes straight from your local greengrocer!