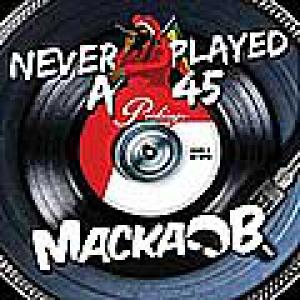 For 'Never Played A 45' veteran deejay Macka B joined forces with the Peckings brothers and hearing that name, immediately tells us we're in for a spread of classic riddims. The highly infectious title track, in which Macka B declares his love for vinyl, was already a serious hit in the sound system scene (the only irony being this album isn't available on vinyl yet), and the funny cartoon clip accompanying 'Medical Marijuana Card' is gathering view after view on YouTube. Where those aforementioned riddims are concerned, with the necessary online support, yours truly recognized Yabby You's Death Trap riddim ('Big Thief'), Boops (title track 'Never Played A 45'), Johnny Clarke's 'Every Knee Shall Bow' ('Soundman'), a revamp of Really Together ('Iternal Love'), the little-known 'Hold On' by The Maytals ('Medical Marijuana Card'), I'll Be Lonely/Those Guys ('Another One Gone') and finally the obscure 'How Did You Know' by Raphael Gray (here 'Rasta Tell Dem'). But also content-wise the songs on 'Never Played A 45' are a treat. Opener 'Hail H.I.M.' is a tribute to Haile Selassie I in which Macka even tackles the Lord's Prayer in Amharic and like in 'Never Played A 45' he proclaims his love for vinyl, with 'Soundman' and 'African' Macka does the same for the sound system scene and the African continent. In his distinctive humorous style, in 'Too Much Chicken', Macka criticizes the craving many West-Indians have for chicken, reciting a number of arguments that should make even the biggest chicken fanatics think. Of the same order is 'Rasta Tell Them', a song which lists a whole range of subjects that for Rastafarians have been commonplace longtime already, but are only now being taken seriously by the rest of the world. Thanks to the wonders of modern technology, 'Never Played A 45' also features a duet with Phyllis Dillon, a revamp of her classic 'One Life'. Both 'One Life' and 'Iternal Love' may sound like delicious lovers rock classics, for Macka B it's all about the love of Jah. One of the absolute top releases for 2015!