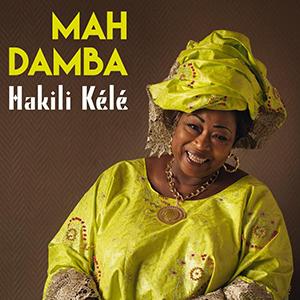 Mah Damba, niece of the famous Fanta Damba and daughter of djeli Baba Sissoko, is a griotte or djeli-moussa from an illustrious lineage of Malian griots, but withdrew from the music scene after the demise of her husband and musical mainstay, ngoni master Mamaye Kouyate.

Now, about 10 years after her last release, the 2010 release of 'À L'ombre Du Grand Baobab', an ode to her departed husband, guitarist Thierry Fournel, also heard on guembri and gourd (and after almost two decades of collaborations a friend of the family), managed to convince her to return to the studio: "I moved away from the stage, I had less taste for music. And then Thierry came to see me, he made me want to get back to it.".

Thierry's mission was simple: "I wanted to make a simple and clean album that focused on the voice of Mah Dambe.", but the result is this 'Hakili Kélé', an album for which Mah still had to push her musical boundaries: "Unlike my previous records, Thierry suggested exploring different scales. With each piece, we are taking a journey. In the previous ones, I was more fixed in tradition", something she never really had a problem with: "Coming to Europe has opened my mind to other ways of seeing the world; I learned a lot here...".

The instrumentation on 'Hakili Kélé' isn't always traditional Malian either; like in 'Dondori', for example, a song about the courage of the Fulbe, where an accordion emerges giving the song a delta-blues or even zydeco vibe. Not that Mah was a complete stranger to the instrument though: "My grandfather Ousmane Soumano, played the accordion. When Thierry came up with this idea I was delighted! The accordionist is like a second voice, the perfect response to mine.". But of course the typical accompanying sound of the ngoni cannot be absent, played on 'Hakili Kélé' by her cousin Makan 'Badjé' Tounkara, a virtuoso on the four- and seven-stringed ngoni. And the family connections don't end there, as Mah's daughters Sira and Fatoumata 'Woridio' Kouyaté can be heard on 'Hakili Kélé' (the latter also a backing vocalist with Amadou & Mariam) and her son Guimba plays a guitar solo in 'Kabako', a Malian classic in which the glory days of the Bambara or Ségou empire are celebrated. Also to be found in the track list is a new version of 'Sosoly', a song that could also be found on Mah Damba's self-titled 1988 debut album, a cassette only release: "In Mali everyone knows this title. It took me a long way. Really!".