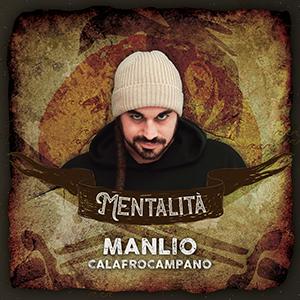 Manlio Panza, better known as Manlio Calafrocampano (a contraction of Calabria, Africa and Campania, referring to the part of Italy where his roots lie) may not be a stranger in his own country anymore, for yours truly 'Mentalita', following 2010's 'Consapevoleza' (still available as a free download) and 2012's 'Sogno', was our first acquaintance with the work of this Italian artist from Naples.

The fact it took until 2020 for this new album to manifest, probably has to do with Manlio's relocation to London in 2014. There he started working with Open The Gate Sound, was one of the founders of web radio #UnityRadioLondon and started organizing events like Sunday Jam (every first Sunday of the month @ The Grow in Hackney Wick) and Bombo Clouds (every last Saturday of the month @ Passing Clouds in Dalston).

With 'Mentalita', Manlio states he wanted to express his predilection and respect for the critical minds surviving in this era in which reason seems to be rocked to sleep with the great masses conforming to the quirks of a society in service of money and material superficiality. The track list of the album looks like one big guest list, as for almost every song Manlio invited one or more of his colleagues. Among the contributors to 'Mentalità' are: Villa Ada Posse, Rasta Blanco, Fido Guido, 'O Zulù, Kento, Radice Nel Cemento, Ras Mat-I, Chisco, Raina, Mattune and Rastacla.

On 'Mentalità', Manlio and his companions constantly alternate between Italian, Calabrian dialect and English, going from ska over new roots and raggamuffin to dancehall. Not all tracks on the album reach the same level (low point is 'Happy', a lightweight penny dreadful), but fortunately most of the songs can convince.

Among others, the track list features the obligatory ganja tune ('Cbd Tie?' featuring Mattune) and an ode to the moon and nature (closing track 'Dolce Luna', also featuring the voices of Sista Gabry and Sista Diletta). But Calafrocampano is clearly proud of his Calabrian roots (the aforementioned 'U Stile Da Calabria' and 'Orgoglio Terrone' with Fido Guido) and doesn't shy away from a political stance either, as illustrated by 'Lo Gestiscono 2.0' featuring Chisco, an indictment of the ubiquitous corruption in Italian culture, in the same vein is 'Oh Mamma Mia' with Kento, in which Manlio takes a close look at the rise of right-wing extremism and populism in his homeland, with the up-tempo 'Refugees Welcome' he counters the views of Matteo Salvini's xenophobic Lega party, and 'Unite' with Radice Nel Cemente & Ras Mat-I could be considered a contemporary partisan song. Or, as he summarizes in the title track 'Mentalità': a lot in life depends on your own attitude. Excellent Italian release!