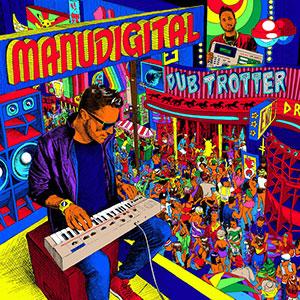 Two years after 'Bass Attack' and following countless tours that took him to all corners of the world, French beatmaker, producer and bassist Manudigital returns with 'Dub Trotter', a 10 track EP entirely recorded whilst on the road.

Most of the track titles refer to locations and places Manudigatal visited or passed through in the last two years, ranging from the Île Aux Canards and a hotel room in the New Caledonian capital Noumea in 'L'île Aux Canards' and 'Noumea Hotel Room', over a seat in the Eurostar ('Eurostar') and waiting for a flight at an airport in Canada ('Canada Airport'), to Iztapalapa ('Iztapalapa In Dub') and Mexicali ('Mexicali'), the first a suburb of Mexico City and the second the capital city of the Mexican state of Baja California.

Musically Manudigital seems to want to explore new horizons as well, as his sound keeps evolving ever further away from the digital dub he's famous for, into dubstep and almost techno-esque compositions. Opener 'L'île Aux Canards' still is quiet ambient dub with an oriental touch, but already sounding a lot more solid is 'Noumea Hotel Room', and tracks like 'Manila' or 'Canada Airport' are almost pure techno.

For three tracks on 'Dub Trotter', Manudigital invited a guest vocalist: in the ponderous 'Safe Guard' you can hear the voice of Blackout JA, but much to our liking were the solid UK stepper 'Dub De 13' featuring Jamaican veteran Joseph Cotton behind the microphone, and 'Must Get Remixed', a collaboration with Peter Youthman and Ondubground.

Only recommended for digi-dub amateurs with a strong stomach!