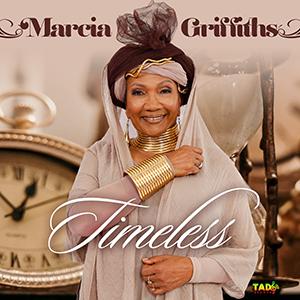 For 'Timeless', Marcia Griffiths returned to the place where it all started: the legendary Studio One! Marcia Griffiths: "'Timeless' speaks for itself, from then until now; working on this album was refreshing and filled with fun memories of early Studio One days when those songs were being recorded!". Griffiths chose a little over 15 timeless classics (including an almost nine minute 'Ska Medley') by artists like Delroy Wilson, Ken Boothe, The Heptones, The Cables or even Abyssinians and Peter Tosh, and, together with producer Donovan Germain and musicians like drummer Kirk Bennett, saxophonist Dean Fraser, the late lamented trombonist Nambo Robinson, multi-instrumentalist Dannie Brownie, bassist Leroy 'Mafia' Heywood, drummer Dave 'Fluxy' Heywood, guitarist Dalton Brownie and bassist Glen Brownie, gave them her own spin. If you were to force us to choose from the track list, we would go for Marcia's versions of 'Love Is A Treasure', original by Freddie/Freddy McKay, the aforementioned 'Ska Medley' comprised of Toots & The Maytals' 'I'll Never Grow Old' (Marcia even managed to persuade Toots to join her and breathe new life into the song), Jackie Opel's 'You're No Good', 'Good Good Rudie' and 'Rude Boy/Walk The Proud Land' by The Wailers, the delicious 'Once Upon A Time' (Delroy Wilson), the almost perfectly executed 'Love Me Forever' by Carlton & The Shoes and finally the super catchy 'Rock Steady/This Old Man', by Alton Ellis and Sugar Minott respectively. Odd one out in the track list, because neither ska, nor rocksteady or reggae but rhythm-and-blues, is 'Cry Me A River', written by American songwriter Arthur Hamilton, sung into eternity by Julie London and in Jamaican music history best known in the version by Jackie Opel, who stayed quite close to the original, but above all else 'Timeless' is pure joy from start to finish. Lady Marcia we salute you!