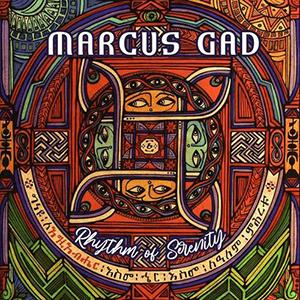 With his 'Enter A Space' EP, released early last year, French-New Caledonian artist Marcus Gad briefly explored new musical horizons, but for 'Rhythm Of Serenity' he returns to his true love: the reggae sound of the Virgin Islands. Gad has never hidden his fondness for the work of Midnite, and influences could that sound could certainly already be heard on 2017s 'Chanting'. However, for 'Rhythm Of Serenity', Marcus went a step further and joined forces with Zion I Kings producer Andrew 'Moon' Bain: "A dream became true! Not everyone has the chance to work with the artists who influenced them. This is a big chance!". Moon created the riddims and Marcus apparently didn't have to wait long for the necessary lyrical inspiration: "When Moon came with riddims, I was listening to them and one or two hours after I was on the microphone to sing my lyrics. The track 'Rhythm Of Serenity' came about this way... I wrote it in less than an hour and then something magical happened in the studio. That's why we chose to use it as the title of the album, as it represented what we were doing: producing soothing reggae with a spiritual message. It's the perfect banner for this project.". Apart from producing twelve new tracks, for the very first time, Gad also ventured into a song in French: "'Pouvoir' is my first track in French, but I wanted to address my people in New Caledonia. 'Pouvoir' is a distress call for indigenous people, regardless of where they're from, calling on the preservation of their traditions. This song is particularly dedicated to the Kanak people. I wanted to remind people of their history and culture and the simple fact they exist!". The only vocal guest on 'Rhythm Of Serenity' is Guyanese-American singer and rapper Blakkamoore (formerly known as Jahdan Blakkamoore and ex-front man of Noble Society) who makes an appearance in 'InI Royal'. The beautiful cover illustration for the album is the work of Selam Semrete Selassie, an Italian artist from Umbria, who based herself on traditional paintings as often found in Ethiopian (rock) churches, but at the same time incorporated the "flèche faîtière", the national symbol of the Kanak people (the original inhabitants of New Caledonia), in the design, and underneath the title of the album added a quote from the Bible in Amharic (Psalms 136: 1, "We submit unto God for He is good, for his mercy endureth for ever."). Gem of an album in every which way and already one of our absolute recommendations for 2020!