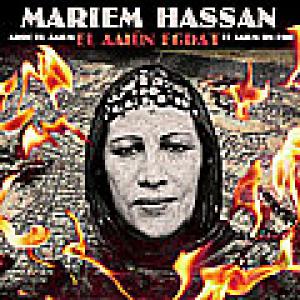 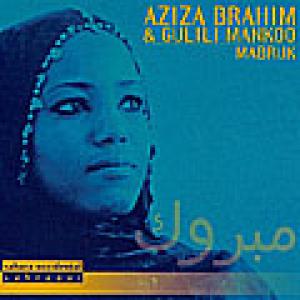 Since they both just released a new album, it seemed a nice idea to compare the Queen of Sahrawi music with her younger counterpart.

'El Aaiun Egdat' is a rather classic, but very solid desert blues album with a jazzy touch (the saxophone on opener 'Arfa') thrown in for good measure and Hassan's voice in a central role. The title of the album, 'El Aaiun Egdat' ("El Aaiun burns") refers to the capital of the Sahrawi Arab Democratic Republic (a region occupied by Morocco) and many of the songs on the album are about the political situation in the Islamic world ('Arrabi Al Arabe' or "Arab spring") and more specifically in the SADR (title track 'El Aaiun Egdat', 'Annasr Shouru Tetnada', "victory beckons" or 'Saharauia Ana', "I'm Sahrawi"). The tense atmosphere between Sahrawi and Moroccans is best illustrated in 'Almalhfa', a song about the melfa, the often brightly colored traditional veil robes worn by Sahrawi women, Hassan wrote after becoming the victim of a group of young Moroccans in Madrid who attacked her for wearing this Sahrawi symbol.

Aziza Brahim sounds very different; thematically her songs may match those of Hassan, musically Brahim sounds a lot more upbeat and with influences from rock ('Hamid Rabi') and blues ('Wilaya Blues'), also more westernized. Aziza occasionally sings in Spanish (the singer has been living in the Spanish city of Leon for the past decade) and is accompanied by Gulili Mankoo, her band counting musicians from Senegal, Colombia, Spain and of course the Sahrawi Arab Democratic Republic.