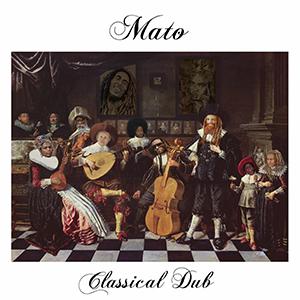 After having previously experimented with reggae interpretations of French chanson ('Il Est Cinq Heures, Kingston S'éveille'), hip-hop classics (the 'Hip Hop Reggae Series' releases) or soundtracks of famous Hollywood films ('Hollywoo Dub'), for 'Classical Dub', French producer Thomas Blanchot aka Mato created a series of dub interpretations of compositions from the canon of classical music. You don't even have to be an amateur of the genre, as the compositions Mato selected are so well known they can be considered evergreens. Maybe it would all have sounded even better if Mato had decided to join forces with a real symphonic orchestra, but his dub versions of compositions like 'In The Hall Of The Mountain King Dub' (an adaptation of the music Edvard Grieg wrote for the musical play 'Peer Gynt'), 'Carmen Dub', a dub version of the well-known composition from Georges Bizet's opera of the same name, 'Swan Lake Dub', a dub version of Tchaikovsky's  'Swan Lake', horror classic 'O Fortuna Dub', originally part of the medieval poetry collection 'Carmina Burana', but set to music by Carl Orff at the beginning of the twentieth century, and our personal favorite 'Also Sprach Zarathustra Dub' by Richard Strauss, a composition you'll be all too familiar with thanks to the soundtrack of film classic '2001: A Space Odyssey' (see also the accompanying video), are still highly enjoyable. 'Classical Dub' indeed!