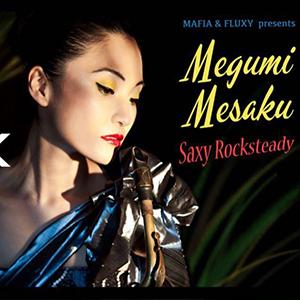 Since London-based Japanese saxophone sensation Megumi Mesaku started busking in the London metro and last year a video of one of those improvised street sessions (a saxophone improvisation of Lester Sterling's 'Pup-A-Lick', a song from 'Rock-steady Explosion' by Byron Lee And The Dragonaires) ended up on social media, in no time she grew into an internet sensation, and with 'Saxy Rocksteady', produced in collaboration with Mafia & Fluxy, she now presents a second instrumental solo album.

Megumi was born in Soma, a city in the prefecture of Fukushima in Japan, but spent her childhood in Chiba, more to the south. A future in performing arts seemed almost inevitable, as already at the tender age of five, Megumi started taking ballet and organ lessons. Age seven she switched to the soprano recorder and two years later she became a member of her school's show band and was introduced to the saxophone for the first time: "The first time I saw a saxophone I was strongly inspired and thought that I must play that instrument in my life". She got her first saxophone from her neighbor Mr. Taguchi, a professional saxophonist himself, and Megumi still plays that instrument today. In her teens Mesaku began to discover musical styles like ska, reggae and rocksteady, but also punk, township jive and jazz, and from that period she remembers: "I had to fight with my parents to go to nightclubs in Tokyo when I wanted to listen to ska music". When she was seventeen years old, she bumped into Gaz Mayall & The Trojans at one of Tokyo's many nightclubs, and would meet them again during a trip to London in 1994. Megumi fell in love with the cultural melting pot that is the British capital and decided to relocate to the United Kingdom in 1995. In 1997 she and Natty Bo founded Top Cats (Megumi still is an active member of the band), and she is also a fixture in Ska Cubano, another project with Natty Bo.

However, because she kept getting asked about a possible album from fans of the clips she'd posted and passers-by who heard her playing, Megumi finally returned to Mafia & Fluxy (with whom she'd already collaborated last year for the Christmas album 'A Saxy Reggae Christmas'). The London riddim tandem was instantaneously enthused and the result is the extremely enjoyable 'Saxy Rocksteady'. In the track list mainly compositions tailored to Mesaku's saxophone ('Driving Me Crazy', 'Light In The Garden' or 'Tengoku', Japanese for "heaven", are all instrumental gems), but also covers of, among others,  Richard Rodgers' jazz evergreen 'Blue Moon' (here 'Bright Moon'), Bob Marley's 'Stir It Up', Sugar Minott's 'My Love Is True' (here 'Let Me Feel It'), 'You Are My Favorite Gentleman' is an instrumental version of Rita Marley's 'Play Play', and in opener 'Megumi Special' we recognized the intro of Prince Buster's 'All My Loving', which in turn was a cover of the Beatles' classic of the same name. Amateurs of vinyl we'd like to inform that a limited edition 7inch of the title track has been released as well. Megumi's saxophone skills prove highly contagious, but, should the opportunity arise, we'd still recommend you try catching her performing live somewhere!