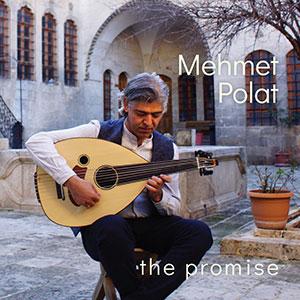 Turkish oud-player Mehmet Polat sees the twelve songs on his new album 'The Promise' as houses in the same street, all different but connected.

Of course, Mehmet's oud remains the leitmotiv in the songs on 'The Promise', but this time Polat also called on a number of musical colleagues.

The enchanting 'Footprints' features Sinan Arat on ney and Alper Kekeç on drums. A lot more eclectic sounding is 'Permission', for which Mehmet drew inspiration from the concept of "gönül nzasi", which translated from Turkish means something like "wholehearted permission". The composition starts off as a melancholic Persian afshari makkam, but soon changes into a cheerful buleria flamenco. It also features Elnur Mikayilov's kamancheh (a bowed string instrument appearing in various forms in Armenia, Iran and the rest of Central Asia, with origins in ancient Persia). 'Fidelity To Istanbul' is a hüzzam makkam (a melancholic sounding makkam with characteristic microtonal intervals) which Polat dedicated to his teacher Fethi Cönk.

Even though 'The Promise' is once again a largely instrumental album, it also features the odd vocal contribution, like in the appropriately titled 'Being The Voice', in which Shwan Sulaiman interprets a gazel (Turkish form of improvised solo singing and the vocal counterpart of the taqsim) by Kurdish author, judge and translator Ibrahim Ahmed, or 'Nêterseno', a poem originally written by eleventh-century poet Baba Tahirê Uryan, featuring Mikail Aslan on vocals and, for the occasion, translated from Kurdish to Zazaki (Zazas or Zaza-Kurds are a people found mainly in the area around Dersim, today's Tunceli, in Eastern Turkey).

'The Promise' feels like a stroll through Istanbul's Great Bazaar, putting all your senses to the test and making you discover something new behind every corner.