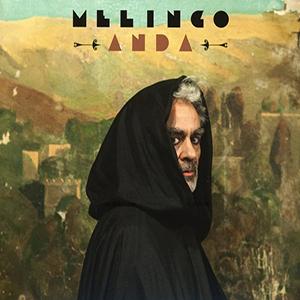 On 'Anda', Argentine enfant terrible Melingo takes on his linyera (Lunfardo for "vagabond" or "vagrant") alter ego for the second time now. In our review of predecessor 'Linyera' we already compared the man with Tom Waits and Nick Cave, but also with Serge Gainsbourg, and not haphazardly as it turns out, as for 'Anda' he revamped Gainsbourg's 'Intoxicated Man'. With 'Gnossienne', a reworking of the well-known work by nineteenth century French composer Erik Satie, Melingo provides a pinch of orientalism, and the album opens with a salute to Argentine tango master Osvaldo Pugliese in the form of a Melingo version of his 'Se Viene El Dos Mil'. In 'Sol Tropical' (written by Alfredo Le Pera, lyricist for tango legend Carlos Gardel) Melingo takes us to a dance salon in the Cuba of before the revolution, and for 'A Lo Megata' (a version of the original by Edmundo Rivero, who, in the middle of the twentieth century, became a true icon in Japan), telling the unlikely but true account of Japanese baron Tsunayoshi Megata who, after undergoing surgery in the French City of Light in 1920, fell under the spell of tango, introduced the music and dance in his homeland, and opened a dance academy in Tokyo allowing the Japanese aristocracy to take free tango lessons, and 'En Un Bosque De La China', we end up all the way in Asia. On 'Anda', Melingo once again masterfully walks the tightrope between respect for his country's musical past and idiosyncratic interpretations of classics, a duality he nicely captures in title track 'Anda': "Anda, que nada esta viejo. Es solo el pellejo, el traje mortal, con olor a libro dulce, ese aliento original in todos los calendrios, yo te guardo este lugar. Un refugio, una guarida, para poder regresar y volver a empezar." ("Go on, nothing's old. It's just a skin, a deadly suit, with the smell of a sweet book, that original breath in all the calendars. I'll guard this place for you, as a hideout, a lair, so you can go back and start over.").