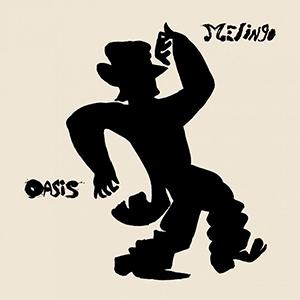 For 'Oasis', Melingo yet again assumes the role of his linyera-alter ego, as the album forms the final part of a triptych that started with 'Linyera' back in 2014. The album should also be the start of an audiovisual chamber opera about that same linyera character. Apart from the linyera, 'Oasis' also features various side characters, each given shape by a vocal guest. In opener 'El Oráculo', Enrique Symns appears as the oracle, for 'El Blues Rebétiko De 7 Vidas', Andres Calamaro plays the role of 7 Vidas ("seven lives"), in 'Camino Y Hablo Solo', Italian singer-songwriter Vinicio Caposella gives shape to the "cafisho cocoliche" ("Italian pimp", a derogatory term used to describe Italian migrants who settled in Argentina at the end of the nineteenth and beginning of the twentieth century), and poet Fernando Noy embodies evil in 'Caminito Rebétiko'. At the same time Melingo goes in search of his own history and ancestors, a journey that eventually leads him all the way to Greece and is illustrated by songs like 'Caminito Rebétiko' or 'El Blues Rebétiko De 7 Vidas': "The linyera has a dream in which he sees a woman playing a kind of Greek mandolin; an image inspiring him to go in search of his own roots.".  The title track of the album has turned into a family project, as it was written by Melingo's wife Maria Celeste Torre, who also performs it together with their son Felix Melingo Torre (who can also be heard in 'Navegantes'). Fascinating finale of this musical trilogy!