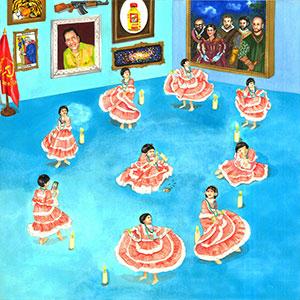 In the late nineteen seventies and early nineteen eighties, Colombian Cumbia Siglo XX was one of the innovators in the cumbia genre, starting to incorporate influences from disco and rock in their music. With 'Cumbia Siglo XXI', Eblis Alvarez aka Meridian Brothers now takes the innovation of the genre into the twenty-first century.

True to habit - the largely acoustic '¿Donde Estas María?' may be regarded as an exception in his oeuvre - Alvarez once again makes maximum use of drum machines, guitar effects, synths and algorithmic software: "I have different dimensions of relation to cumbia, both innocent from my childhood and environmentally because of the updated cumbia started in the last decades in Latin Amarica. My main use of cumbia though is as a channel of communication - a frame where I can put all the other jibber jabber that sounds in my head as a composer.".

Eblis is also categorical about the influence of Cumbia Siglo XX and bands like Grupo Folclorico or 2000 Voltios (the artwork of 'Cumbia Siglo XXI' clearly refers to that of their 'La Cumbiamba' album) in his musical development: "In my taste, nothing like them is found through the Colombian discography, it's so funky and futuristic. They made an enormous jump to the future. It's impressive, such a way to approach the traditional but without losing any of the core of the musical universe of tambores, millo, gaita and all the rhythms and airs.".

As for the songs on this album, Alvarez states: "Most of the lyrics of the songs on the album are about getting all these new or neo-new ideologies of the mainstream and reducing them to the absurd, mostly because these new ideologies are largely tearing social groups apart into narrower groups.". That being said, the first single from the album, 'Puya Del Empresario', is not cumbia but puya, one of four rhythms that make up the Colombian vallenato, but the catchiest track on 'Cumbia Siglo XXI' is definitely 'Cumbia Del Pichamán', Alvarez' version of Dusty Springfield's 'Son Of A Preacher Man'.

'Cumbia Siglo XXI' is experimental and innovative, as we've grown accustomed to from Meridian Brothers, but at the same time delivers exactly what the title indicates!