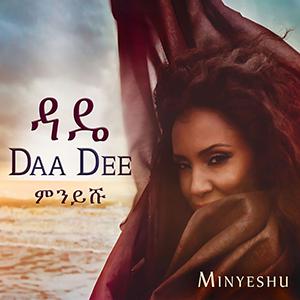 Five years after 'Black Ink', Dutch-Ethiopian Minyeshu returns with 'Daa Dee'. This title can be translated as "baby steps" and is the sound Ethiopian mothers make to encourage their little ones to take those first steps. The song is a so-called tizita, Amharic for "desire" or "nostalgia", and the Ethiopian equivalent of Portuguese fado or American blues. Minyeshu, who ended up in the Netherlands via Belgium in 1996, tells about her search for a new home in 'Yetal' ("where is it?"): "I was looking for a home, while all the time not realizing I was already home, as home is me! I was inspired by life itself and all it has to offer - love, happiness, sadness, nature, gratefulness and so on - and all these things make up what home is and should be embraced.". For those who have already visited Ethiopia, the subject of 'Enchet Lekema' will sound familiar, as in this song Minyeshu praises the power of the many women who earn their living by dragging large bundles of wood from the hills around Addis Ababa to the capital where they sell it as firewood. Another ode to womanhood, but in this case to the primal mother of us all, Dinknesh (in the West better known as Lucy, the remains of a female Australopithecus afarensis discovered in Northern Ethiopia in 1974), is 'Azawntua'. The groovy 'Wolayta' is an ode to the Welayta, a small ethnic minority in Ethiopia that has had a profound influence on the development of the country's music and dance. Modern Ethiopian music by a woman with stones!