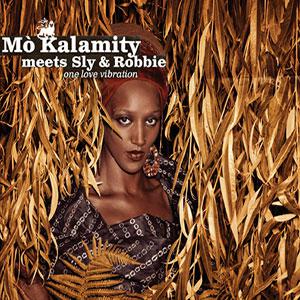 For 'One Love Vibration' French-Cape Verdean Mo'Kalamity this once left her regular backing band The Wizards behind and travelled to Jamaica to collaborate with the legendary riddim twins Sly & Robbie. And it didn't end there, as at Anchor Studio the singer was also joined by keyboardist Robbie Lyn, guitarists Dalton Browne and Mikey Chung, and saxophonist Dean Fraser. The joint recording sessions eventually resulted in enough material for a new album. With opener 'Kingdoms Of Africa ', the only song of which a dub version was also added to the track list, Mo pays tribute to her African roots, and it's also proof that stylistically not all tracks on 'One Love Vibration' differ all that much from the material she recorded with The Wizards. In some tracks, like 'Leave Out Babylon' or in the dubby outro of 'Fire' (also our favorite songs from the track list), the signature sound of the riddim twins is undeniable though. We keep having a hard time understanding everything Mo'Kalamity sings, but that's surely something that won't faze her fans.