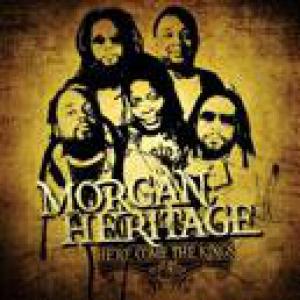 The royal family of reggae is back! Ok, Morgan Heritage has again been sharing a stage for almost a year now, but the wait for a new album continued. With only twelve tracks, 'Here Come The Kings' is a relatively short album, but the Morgan-clan has once again created musical fireworks. The track list contains three of the four songs that already appeared on their digital 'The Return' EP ('Stand Up', 'The Return' and the Michael Jackson cover 'Girl Is Mine') which was released earlier this year, but also 'Perfect Love Song' (which, with matching video clip, seems readymade to take the (American) charts by storm), 'Love Stoned' featuring an enjoyable Shaggy or the powerful opening song 'Man Has Forgotten', in which they announce they aren't quite finished yet. Morgan Heritage reclaims its throne, watch out 'Here Come The Kings'!