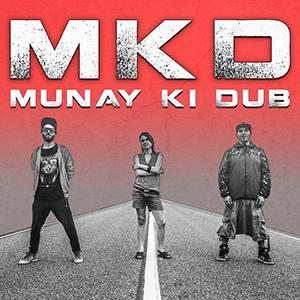 A few months after the Dub-O-Phonic label introduced us to the Argentineans of The Dubbstyle, we return to the cradle of tango for 'MKD', an EP by Munay Ki Dub, a trio from Traslasierra in the province of Cordoba in central Argentina. Munay Ki Dub describes itself as an "electronic live dub trio" and consists of Alejo Gonzalez (programming, keys, bass, guitar & vocals), Rebecca Clements (vocals, violin, melodica, keys and percussion) and Roby Torcello (guitar). The name of the band is Quechua (the language of native South American tribes who populate large areas of Bolivia, Peru and Ecuador) and can be translated as: "I love dub!". 'MKD' counts 4 tracks of which opener and political pamphlet 'Warning' immediately draws the attention. For this track the band used a sound clip from a live intervention by Arab-Israeli journalist Lucy Aharish, who reported on the humanitarian crisis in Syria in 2015 as follows: "Right now, in Halab, Syria, just an eight-hour drive from Tel Aviv, a genocide is taking place... You know what? Let me be more accurate: It is a holocaust. Yes, a holocaust. Maybe we don't want to hear about it, or deal with it, that in the 21st century, in the age of social media, in a world where information can fit into the palm of your hand, in a world where you can see and hear the victims and their horror stories in real time... in this world we are standing and doing nothing while children are being slaughtered every single hour.". The dubby 'The Dub Sound' does exactly what it says on the package and Rebecca Clements' violin in 'Bad Babylon' gives the song an unusual folky touch. Excellent calling card of a band that you should definitely keep an eye on!