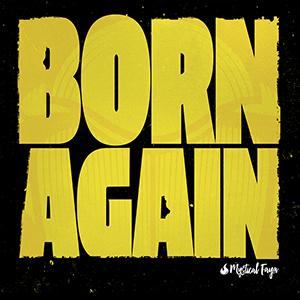 Even though Mystical Faya already released two long players (2013s 'Never Give Up' and 2016s 'Sleeping Souls'), and with last year's 'Chill Sessions', an album full of soul, funk, electro and jazz, even sidestepped from reggae altogether, we only got to know the band from Besançon in the east of France thanks to the contribution of front man Mystic Loïc on 'Together', Faygo's second long-player released earlier this year and now this 'Born Again' EP. The track list of 'Born Again' counts five new songs, stylistically alternating between digital reggae, roots ('Confusion', a delicious duet with Marcus Gad, 'Simplicity', in which Mystic Loïc expresses his desire for a simpler existence), rub-a-dub ('What Goes Around', in which Mystical Faya confronts us with the fact the consequences of our actions can rebound like a boomerang, 'Youthman') and a touch of soul (title track 'Born Again'), completed with two dub mixes and 'Jah Never Fail', a duet with Jamaican vocalist Derajah that dates back to 2017. Excellent EP from a French band you should definitely keep an eye on!