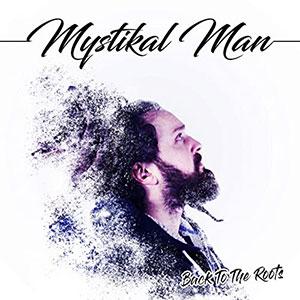 We'd never heard of the man before, but in his own country, Brittany-born Romain Thorez aka Mystikal Man has been active for over ten years, often supported by no more than two turntables, but still managing to build a solid live reputation.

For 'Back To The Roots', Mystikal Man collaborated with Irie Ites and Jibé 'Cody Jahrett' Hueber of Skankman Studio in the Breton village of Domalain.

In the track list, 15 new songs for which he managed to put together a remarkably impressive guest list, and occasionally recycled a classic riddim.

Lyrically, Mystikal Man takes a stand against American biotech multinational Monsanto ('Monsanto'), the political class ('L'homme Politique'), our threatened liberties ('Freedom', over a soulful riddim in which the saxophone accents of horn section Akasha Sax Dub & Bone stand out) or denounces the power of the pharmaceutical industry in 'Docteur', a song which already appeared as a single earlier this year.

Opener 'Change' is a combination with Perfect Giddimani, and elsewhere in the track list we find, among others, Chezidek (the excellent title track over a revamp of the classic Race Track/Ride Me Donkey riddim), compatriot Keefaz ('Positive') and veterans King Kong (for 'Call The Police', Irie Ites dusted off their 2010 Billy Jean riddim) and General Levy ('Dangerous Time', for which snippets from Barrington Levy's 'Under Mi Sensi' were sampled).