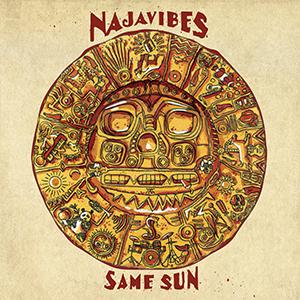 Swiss band Najavibes may have been active for over twenty years, but because during that time they were mainly active as a backing band for veterans like Lee 'Scratch' Perry, Cedric 'Congo' Myton, B.B. 'Gaylads' Seaton or Prince Alla, this 'Same Sun' is only their second album to date, released just less than ten years after 2011 debut effort 'Musical Road'. In the meantime, the band has clearly come a long way, gained a lot of experience and made the right contacts. 'Same Sun' was mixed by Prince Fatty and Najavibes invited a number of international vocal guests like Kumar (former front man of Raging Fyah) and Mark Wonder, Roberto Sanchez and the American-Zambian rapper Rootwords and his Swiss colleague Jonas. The song 'Parcours', in which these last two appear, is not only a bit of an odd one out because the song is more hip-hop than reggae flavored, but moreover because it's the only track on 'Same Sun' in which French can be heard. Title track and closing track 'Same Sun', featuring Aston Barrett Jr. on keyboards, nicely sums up what Najavibes is all about: "We all live under the same sun, so why would we rather punish than help one another?". And in 'Insecurity' they perfectly capture how the government abuses the insecurity of its subjects to push through ever stricter security measures thus getting more and more grip on our daily activities. For the sound of 'Live With Respect' the Swiss have clearly listened carefully to Sly & Robbie's Taxi Gang, the instrumental 'Catty Walk' was given a more jazzy vibe, we're treated to a dash of ska you with 'Sip A Glut', and 'Love Revolution', our personal favorite on 'Same Sun', in which Mark Wonder proves once again that he is one of the most underestimated vocalists of Jamaica, is a delicious piece of new roots.  The cover design for 'Same Sun', a design by Genevan graphic artist Exem, is immediately reminiscent of the famous Aztec sunstone kept in the Museo Nacional de Antropología in Mexico City, but if you look closely you'll notice that the iconography and symbolism Exem used on his "stone" is all a music-related. Guitarist and lead vocalist Léo Marin doesn't have a voice that blows you away, but musically the songs of Najavibes are well put together and the result is a more than enjoyable reggae album.