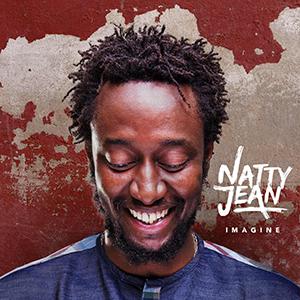 Yours truly has been an unconditional fan of Danakil vocalist Natty Jean since the release of 'Santa Yalla', his 2012 solo debut. And with this successor he was effortlessly able to blow us away yet again! 'Imagine' was produced by Yovo M'Boueke (Alpha Blondy, Rachid Taha, Amadou & Mariam) and mixed by Godwin Logie (Bob Marley, Steel Pulse), but for the arrangements of the tracks Natty Jean also collaborated with Malian music veteran Cheick Tidiane Seck, and Manjul was also given an important role once more. Alternating between French, Wolof and English, on 'Imagine' Jean mainly talks about the concerns, dreams and hopes of West African youths. 'On M'a Dit' talks about how Europe has become an increasingly dangerous and difficult to reach destination, and title track 'Imagine' (accompanied by a video clip that won't make you smile) tells about the difficult journey thousands of migrants undertake hoping to improve their living conditions, but also those of their family members left behind. In opener 'Laissez-Nous' Jean criticizes the decline of democracy in the West, and another side of his personality he shows in 'Salimata', an ode to strong African women, and 'Ak Yow', a love tune and a duet with Senegalese mbalax, r&b, hip-hop and reggae princess Viviane Chidid. Other vocal guests on 'Imagine' are Malian Diamy Sacko, who can be heard in the aforementioned 'On M'a Dit', and Senegalese rappers Didier Awadi and Gaston aka Sun Kompë, provide some hip-hop vibes in 'Prezident'. Closing track 'Echosysdub' was previously used as the opening track of 'Danakil meets Ondubground', and with its dubstep sound differs somewhat from the rest of the tracks on 'Imagine'. With exactly the right mix of fragga, West-African music and hip-hop, and the right guests in the right place, this album is one of the absolute reggae recommendations for 2018!