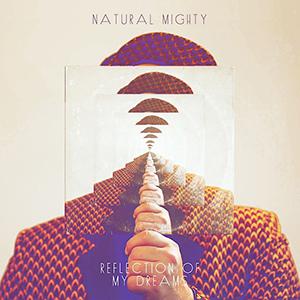 Their 2015 'Good Time' EP, our first encounter with the Parisians of Natural Mighty, did not really leave a lasting impression at the time, but with this new album the French band clearly seems to have found a second wind. For concept album 'Reflection Of My Dreams', Natural Mighty took to Fabwise's Wise Studio and drew inspiration from 'Sandman', a comic series by Neil Gaiman from the nineteen nineties, in which the main character, Morpheus, ruler of the dream world, who was captured by means of an occult ritual, is released after 70 years of imprisonment. The track list contains ten songs, all revolving around the central theme of dreaming. The fact that for the recordings of 'Reflection Of My Dreams' the band was extended with a selection of French horn players including Guillaume 'Stepper' Briard, Rico Gaultier and Saké and Fab Smith from French afrobeat formation Frères Smith, certainly hasn't done the end result any harm, and the rather heavy French accent we still heard in lead vocalist Gene-Vincent's English on 'Good Time', seems to have greatly improved. Our favorites from the track list: solid opener 'Walk Away', about escaping reality and dreaming of a different, better world, 'One Night', with more or less the same theme, the infectious love tune 'Give Me', featuring a wonderfully vintage sounding organ, and finally, the nyahbinghi vibes of 'A Road'. Excellent French roots production!