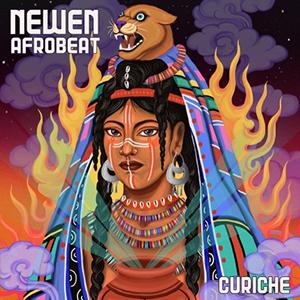 Yours truly got to know the Chilean afrobeat of Newen Afrobeat back in 2017 thanks to the release of their 2 track 'Newen Plays Fela' EP, but now the fifteen-piece band returns with 'Curiche', a new 7 track album. Translated from Mapudungun, the language of the indigenous Mapuche population in Chile, the title means "black people", and in the eponymous song the band highlights the hidden or little-known history of the black minority in Chile. Also Mapudungun is 'Chaltumay' ("thank you"), an ode to the endangered traditional Mapuche culture. But as the beautiful cover image already illustrates (a work by Chilean tattoo artist Camila Fuentes), 'Curiche' has also become a tribute to womanhood, given shape by lead vocalist María Francisca Riquelme (a female front woman is still a rarity in afrobeat) and crystallized in the song 'Cantaros' ("clay pots"), a tribute to women symbolized by water as an essential element of life. Newen Afrobeat goes political with 'Open Your Eyes', a collaboration with afrobeat veteran Oghene Kologbo in which the band exposes painful parallels between the inequality, corruption and unemployment on the Latin-American continent and in Africa. Newen Afrobeat knows how to translate these intercontinental parallels musically and with 'Curiche' delivers another excellent afrobeatrelease!