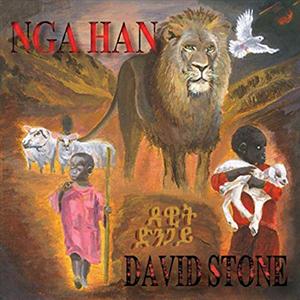 'David Stone' is the long-player debut of Rohan Palomino aka Nga Han, a Jamaican singer-songwriter from Saint Ann who, through his studies, ended up in California in 2007; the beginning of a fruitful collaboration with producer Max Rivera aka Roots Natty of Roots Natty Records. The latter, from Puerto Rico but now active in Santa Cruz, California, was in turn taught the tricks of the trade by Ron Benjamin, former Midnite bassist and now active in Dezarie's band. T-Rock's drum parts on 'David Stone' were recorded and mixed in Laurent 'Tippy' Alfred 's I Grade Studio on the Virgin Islands, and the rolling bass is alternately the work of Roots Natty himself and Akim Johnson. Knowing all this, it should come as no surprise that 'David Stone' bears all the markings of a typical Virgin Islands production (right up to the cover image, also Rivera's work): slow, spiritual, meditative reggae with the typical rolling bass of which Benjamin has made his trademark. When in tracks like 'Christ N Disciples' and title track 'David Stone' (definitely the best song on this album, but 'Iyah' certainly deserves a mention) Nga Han is joined by colleagues like Cameroonian-American Akwerius or the late Luv Fyah, that effect is only reinforced. For two tracks ('Play Your Part' and 'Behold', both of which can be found in a dub version) Nga Han and Roots Natty invited Addis Pablo, whose melodica adds another dimension (the instrument can also be heard in 'Unmoved', but is played there by Max Rivera). Nga Han concludes with the biblical 'Psalm 45', over a riddim driven by nyahbinghi percussion. Strong debut and an absolute must for lovers of the Virgin Islands sound!