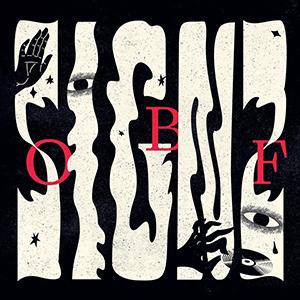 Has it really been six years since the release of 'Wild', the long-played debut of Geneva-based sound system collective O.B.F.? Of course, there was also the impressive album by dub poet Nazamba, two albums with English MC Charlie P, and a lot of 12inch releases, but now O.B.F. finally presents 'Signz', a project which started about two years ago with the idea to create an album without paying heed to time, allowing space for creativity and letting chance encounters shape the music. In any case, it led to an impressive guest list made up of well-known and lesser-known artists. After the success of 'Nazamba', the man in question could not be overlooked, and on 'Signz' he can be heard in the intro of the album and its three interludes.

Also present is Charlie P, and opener 'Ina This Ya Time', in which he can be heard alongside comedian, radio presenter and voice-over artist Irah (known from his Refix Show on YouTube) and London grime legend Killa P, together with 'Bubble', really Charlie's declaration of love for music and the vibe of a dance, but in these COVID-19 times unintentionally taking on a completely different meaning, are among our absolute favorites from the track list. Another highlight is without a doubt the feminist 'Rebel Daawtaz' featuring Jamaican Aza Lineage, a singer we'd urgently like to see present an EP or album. Sr. Wilson and Barcelona based Argentinean singer Belen Natali provide a striking Spanish note with 'Musica'. Wilson can also be heard in 'Party Ram', at the same time a party starter and a salute to the crew of O.B.F., and, together with Biga*Ranx, features in the NO GPS Remix of 'Driva'. UK veteran Tippa Irie steps away from the iconic fast rapping pace we've become accustomed to, but 'I'm An African', a song in which he perfectly captures the complexity of his origins, could easily be used as an anthem for the Black Lives Matter movement.

'Signz' counts 18 tracks (disregarding the intro and interludes), with the second half of the album sounding a lot more industrial, featuring heavy monotonous thumping basses; not really our cup of tea. With 'Signz' the Geneva based crew delivers a more than successful second long player, undoubtedly offering something to everyone's taste!