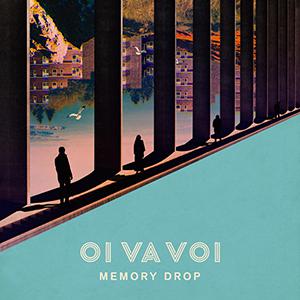 Almost ten years have passed since the release of Oi Va Voi's excellent 'Travelling The Face Of The Globe' album, and we had actually given up on the project of Londoners Josh Breslaw (drums) and Steve Levi (clarinet/vocals). But with a largely new line-up (violinist Anna Phoebe and vocalist Zohara) the band is now rising from its ashes with 'Memory Drop'. The sound of this renewed Oi Va Voi may sound a bit more nuanced than on their previous albums, but in essence the recipe - pop with influences from klezmer, which we situated somewhere between Morcheeba and The Klezmatics in our review of 'Travelling The Face Of The Globe' - has remained the same. Our favorites from the track list: opener 'Arrival', classic Oi Va Voi, 'Vanished World', in which we hear why Oi Va Voi's Josh was immediately convinced of Zohara's vocal qualities ("When we first heard her, we sent her a track and she sent it straight back with a vocal that blew us away!"), and finally 'Big Brother', in which Steve Levi's clarinet is once again given the leading role. Oi Va Voi continues to deliver otherworldly beautiful music!