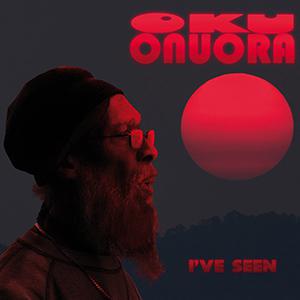 Last year, French record label Iroko Records already re-released a vinyl version of 'I A Tell... Dubwise & Otherwise', the iconic 1993 album by Jamaican dub poet Oko Onuora, and now the Swiss Fruits Records label proudly presents his first new album in about 10 years. And what an album this is! In no less than 16 tracks, Onuora recites his poems, a cappella or accompanied by music created by Dr. T and The 18th Parallel. In opener and title track 'I've Seen', in which Oku also mentions the blood moon featured on the cover of the album, he personifies our planet which has seen many moons and many events pass throughout history, and the similar 'Madda' may also just as well be an ode to Mother Earth as a song dedicated to Onuora's own mother. In 'Don't Like It', interspersed with sound fragments from Jamaican news, Onuora expresses his incomprehension for the street violence, the rampant crime and political instability in Jamaica and in the similar 'Fuel For Fire' the trombone of the late Rico Rodriguez can be heard one last time. 'If Not Now' could be the perfect soundtrack for the numerous protest movements that are currently denouncing injustice in various forms all over the world. In 'Still', Onuora wonders how in the name of Jah it's possible that after the emancipation struggle of figures like Malcolm X, Bogle, Biko or Martin Luther King Jr. we still haven't made more progress, and in 'Jamaica', in which the voice of a certain K'sangel can be heard, Oku sketches an honest portrait of his homeland with its many beautiful but also less beautiful sides. If you prefer a more positive approach, check out 'Black Spectacle', an ode to black beauty, 'Escaping The Blues', about escaping poverty in dance, weed and music, and finally 'Fish Head Story', a fable about a woman who just can't seem to find a way to tell the story in her head. Finally, in 'Dubword Warrior' Oku Onuora manages to summarize in one song what the dub poetry genre stands for. Instant classic!