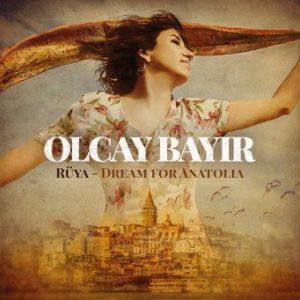 Thanks to the innovative sound of artists like BaBa ZuLa, Gaye Su Akyol or Altin Gün, Turkish music is the new hype in world music. Olcay Bayir, hailing from Gaziantep in the Anatolian part of Turkey, never sounds as rebellious and idiosyncratic as previous examples, yet in her music she unites elements from Kurdish and Turkish folklore with influences from Western genres ('Dolama Dolamayi', which almost sounds like Irish folk). 'Rüya' was produced by Al MacSween and Guiliano Modarelli, both members of world-jazz ensemble Kefaya, and they definitely put their musical stamp on Bayir's songs. When she was sixteen, Olcay relocated to London together with her parents, and unable to speak or understand the local language she started focusing on her music in order to be able to express her feelings at least to some extent. A family tradition by the way, as Olcay's father was an ashik, traditional Turkish bards, who in Alevi tradition provide musical accompaniment during religious and social occasions and are considered the guardians of the oral culture. On her 2014 debut 'Neva/Harmony', Bayir still performed personal interpretations of Anatolian folksongs, but for 'Rüya' ("dream") she mainly focused on own compositions. In the title track she talks about her dream of a better world, a vision that, coincidentally or not, came to her in a dream in which, as an innocent child, she expressed her wishes for a loving and peaceful world. A strophe from opener 'Uzun Ince Bir Yoldayim', part of a song written by Âşik Veysel Şatiroğlu (one of Anatolia's most popular ashiks) perfectly sums up Olcay's musical mission and the Alevi vision of life and death: "Uzun ince bir yoldayim, gidiyorum gündüz gece...". (loosely translated: "I am on a long road between two doors and walk day and night!").